Over the last several years bull riding has become increasingly popular in bars throughout the country. Week after week bar patrons come into local bars hoping they can finally gain the bragging rights associated with not being thrown off of the mechanical bull. While many have successfully been able to ride the bull without being thrown off or injured, not everyone has been so lucky. In fact, many local bar owners have provided extra padding under their bull machines to help eliminate the potential risks associated with falling off the rodeo bull and becoming injured. The padding under the bull horn however, is not always able to protect every patron. Even if patrons sign a waiver, bar owners may still be liable for injuries sustained in an accident. 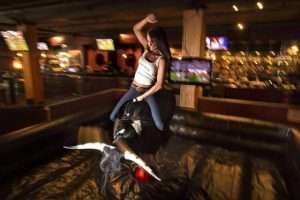 If you are relatively unfamiliar with bar bull riding it is electrically operated to simulate the movements of a real live bull. It reaches high speeds and has the capacity to throw you off much like a real bull.

Recently, Jocelyn Burmeister, a New York native was visiting Johnny Utah’s in Manhattan when she fell off the mechanical bull and tore her ACL. Many other patrons at the restaurant suggested that Jocelyn was visibly intoxicated and that she should have never been granted permission to ride the bull; however, Burmeister tells a different story. In fact, she recounts that she doesn’t even remember signing the waiver which makes this story even more trickier in terms of who would be held responsible.

While this story has garnered a lot of publicity both locally and nationally, this story is not uncommon. In fact, over the years several people have reported being injured while bull riding inside of restaurants only to find out later that the restaurants waiver protects patrons from suing them.

The question now remains, if a client is injured in a restaurant does the restaurant always get excused from being liable. Not exactly.

There are several different scenarios that could play out that ultimately hold the restaurant to a higher responsibility. One of these scenarios played out in the above New York case when Jocelyn notated that she doesn’t remember ever signing a waiver. If in fact, Jocelyn never signed the waiver (or never read it) it could mean that she has every legal right to sue Johnny Utah’s.

Another scenario that could put the restaurant in danger of a lawsuit is an unclear waiver. Before threatening legal action against the restaurant, ask a lawyer to review the waiver form that you signed prior to hopping on the bull. If your lawyer deems that the waiver is unclear or cannot be visibly read because of font size, color or just too heavy with confusing legal jargon, the individual who drafted the waiver could be held responsible for your injury.

The question now being echoed throughout the personal injury community is, could your client really have a law suit against a restaurant and the answer is still somewhat in the air. Not all cases are as cut and dry as Jocelyn Burmeister’s case is; however, once you have conducted your due diligence alongside your client you should be able to determine if in fact your client’s injury was due to their negligence or the negligence of the restaurant.

Have you recently had to work a restaurant liability case? Did you determine the restaurant was at fault? Leave your thoughts below.